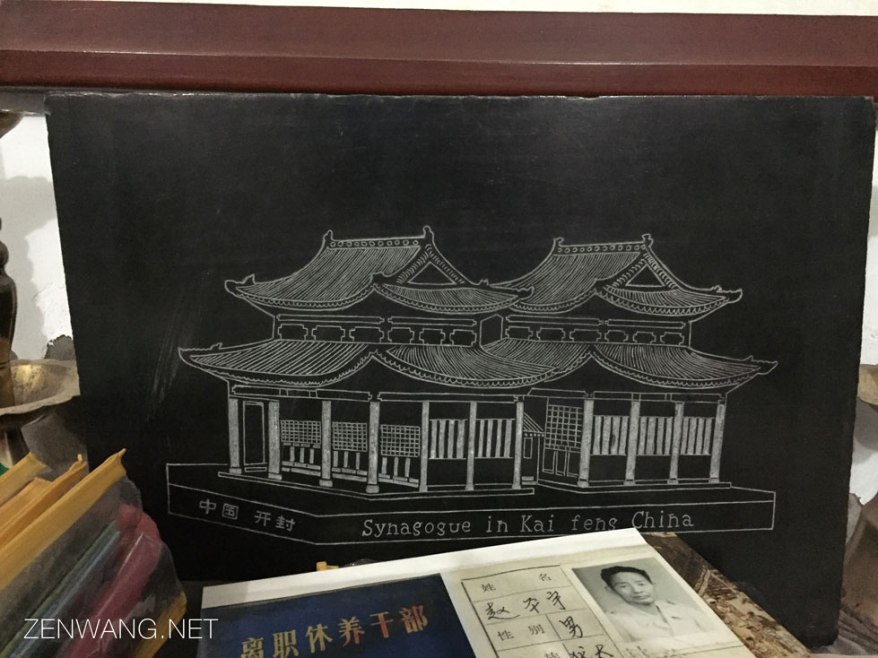 “She had not done wrong, for nothing was lost. ‘Nothing is lost,’ she repeated. ‘He lives again and again, among our people,’ she mused. ‘Where there is a bolder brow, a brighter eye, there is one like him; where a voice sings most clearly, there is one; where a line is drawn most cleverly to make a picture clear, a carving strong, there is one; where a statesman stands most honorable, a judge most just, there is one; where a scholar is most learned, there is one; where a woman is both beautiful and wise, there is one. Their blood is lively in whatever frame it flows, and when the frame is gone, its very dust enriches the still kindly soil. Their spirit is born anew in every generation. They are no more and yet they live forever.” Excerpt from Peony by Pearl S. Buck.

Esther’s ancestral home is leaking and damp. So she moved her most treasured items to her own apartment. This is the rendez vous point for us on day two.

This day could not come soon enough for us. Excited about the prospect, we grab our cameras and wave down a taxi. By the time we get to Esther’s apartment building we are thirty minutes early. When morning comes to China, breakfast is never more than a few steps away. We get two fried rice cakes and share a bottle of yogurt. With our backs loaded with tripods and cameras we gulp down the food. To keep us entertained, a Chinese man does some extremely dangerous (by western standards) repair work on the high voltage power lines near us. I would never want to be his insurance agent. 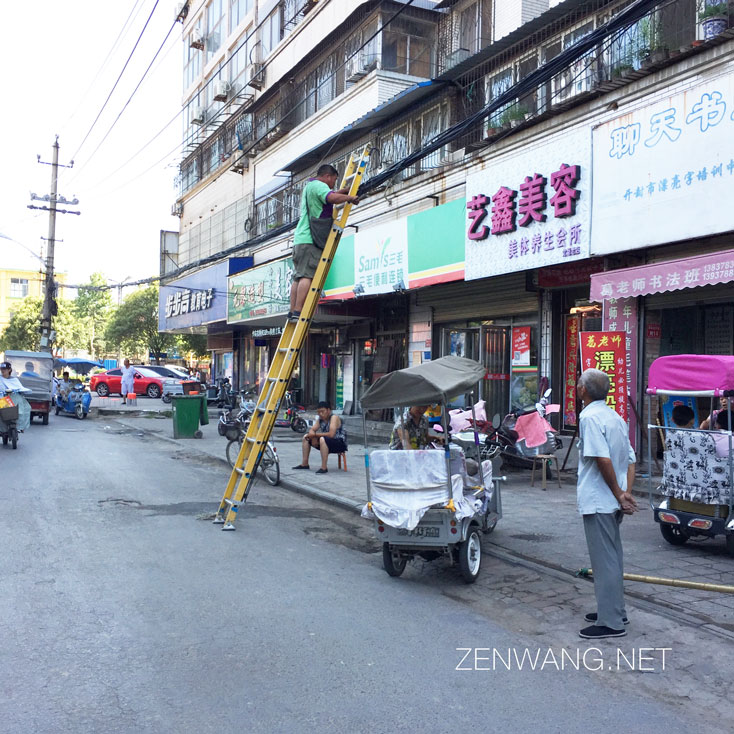 Esther lives on the top floor of an apartment building. As was previously arranged, I give her a ring on the cell phone, she lets it ring three times, I hang up and we go up. Her apartment is slightly bigger than the ancestral house. A large flag of Israel dominates the front lobby. I wonder if she truly loves the country or is she doing this to please most of her visitors.

At our host’s insistence we keep our shoes on. Esther introduces us to her modest living space.

The front lobby is a long hallway that connects all the other rooms. It is full of shoes and books. A table that is too big for the space holds Esther’s lunch box and a sign that indicates this is a private museum. The books are in a bookcase to the right. They are in English and Chinese. These are her research materials on the history of Chinese Jews. Some of the books look old and yellow. On the lobby wall is a plaque in Chinese and Hebrew. This is a replica of the now lost family ancestry plaque that used to hang above the Zhao’s family shrine. “It is the first item we rebuilt using donations.” Esther tells me. 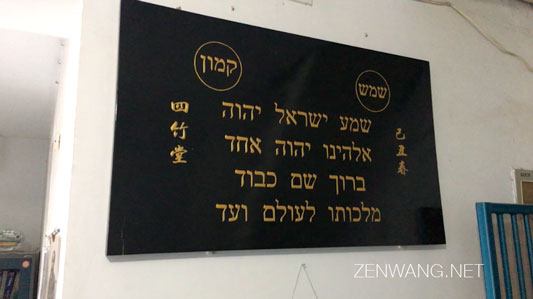 The central room is the exhibition room. With an air conditioner and a floor fan, this is the most comfortable space in her home. It is only much later that I realized the genius of the room. The large bay window faces west, the direction of Jerusalem. It also overlooks the old Jewish quarters. North and South Teaching the Holy Text Alleys are clearly in view. The original site of the synagogue is now occupied by a hospital. Its red roofs and white walls are most prominent. Esther hangs a scroll of the plan of the synagogue on the window so she can superimpose the old on the new. 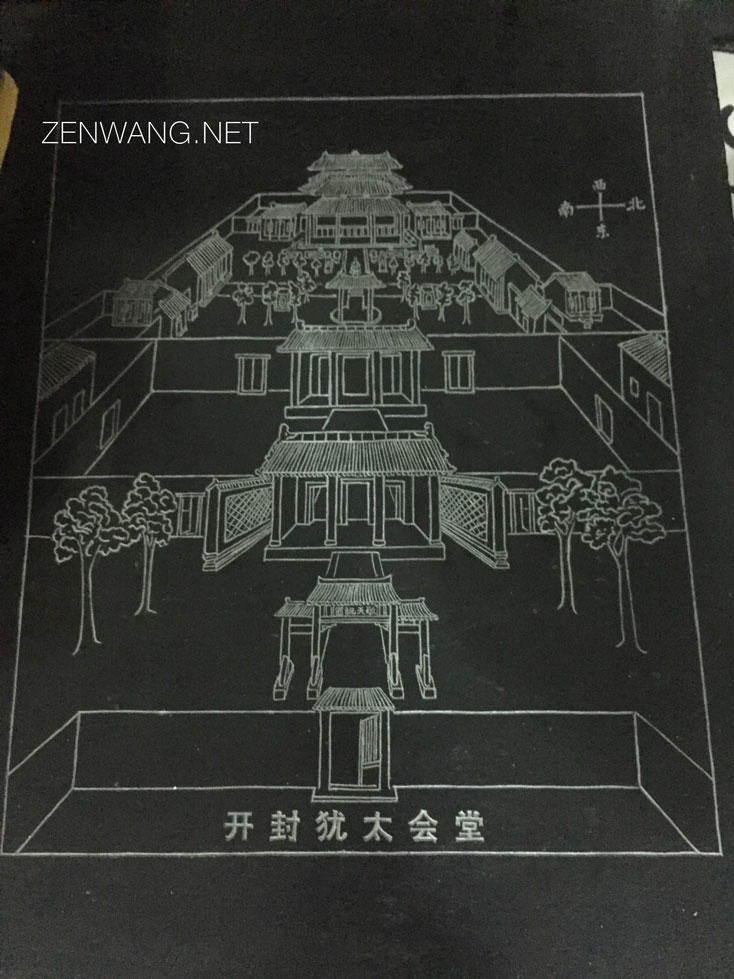 Other than these two rooms there is only the kitchen, the bedroom and the toilet on this floor. In the kitchen she shows me a bag full of spices given to her by Israeli visitors. She asks my wife and I how to use them. The best we can say is use them on chicken or fish. In her bare-walled bedroom she shows off her Judaic ceremonial dresses she wore when she visited Israel back in 2005. She gives us her rare laughter again as she recalls how the people on the streets of Israel cheered at the sight of a Chinese woman wearing Jewish clothing. I did not ask her if she visited the West Bank.

Upstairs in the attic is Esther’s most treasured possessions. One can say they are one of the most treasured articles in the Kaifeng Jewry today. Here is the scale model of the two main buildings of the Old Synagogue and the Torah case. Esther’s father, a Chinese, married her mother, a Chinese Jew. During the Cultural Revolution he did many professions to make ends meet. One of those professions is carpentry. So years later when Esther expressed the need for a Torah case to be rebuilt, he answered. The result is a beautifully handcrafted case housing a set of middle-school exercise books. The books are full of hand-written stories from the Old Testament. There is an actual Torah scroll (a gift from a foreign visitor) tucked in the corner of the case, but nobody can read it, so it is only there symbolically.

At the heart of the Chinese Jewish story is this meticulously crafted case made more so for filial piety, for tradition, for bloodline, for family love than for a nameless and shapeless God who has lost his hold on his people. Inside is a meager but good attempt to hold on to their origin stories. Does these words hold any meaning today? Maybe. Will they hold any meaning for the next generations of Chinese Jews? No one knows. Like the people who rebuilt their synagogue again and again on this forsaken floodplain, the action of preservation holds more significance than the fruit of their labour. 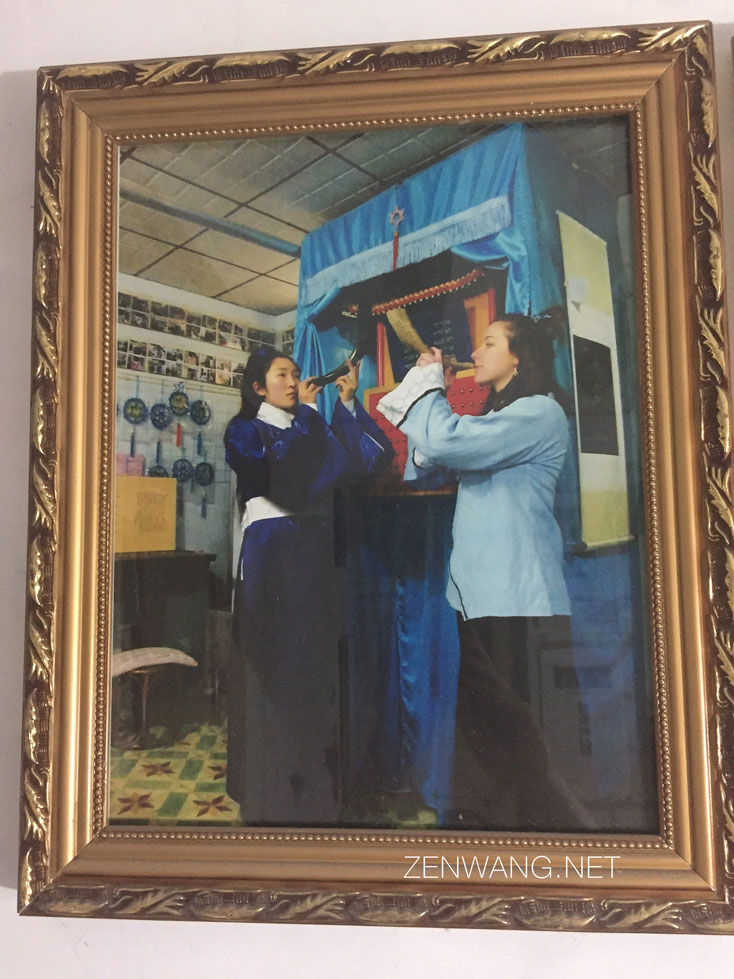 Jews in China swim in a vast river that is yellow. People did not paint swastika on their doors; people did not burn down their synagogues; people did not force them to wear yellow stars; people did not send them on trains to be killed. The Chinese simply pulled out a stool and added another pair of chopsticks to their table. There may not be much to eat but at least it is hot and you are among friends. Indeed, on this trip in China, when we accidentally thought a funeral party was a curbside restaurant they waved us in and wanted us to sit down with them anyway.

That, my dear friends, is what it means to be Chinese, to be Jewish, to be human. “We are all brothers from different oceans.” as Confucius teaches us, “If they have come from afar to see us, then we must be glad and welcoming.”

Esther believes God chose her to be the last of the last keeper of her people’s story. She and her husband decided not to have children. “This way the government cannot shut us up using our family as collateral.” She also plans to buy back all the old properties of the Zhao family and become a “Nail Resident” in her neighbourhood. “The municipal government plans to demolish old town and put up high rises. And I plan to own a lot of houses in old town and stay till the very end.” she tells me, “We the Zhao family, have stayed on this piece of land for eight hundred years continuously, and I am not about to give it up.” With her decision on family planning, I wonder how long her struggles against the current could last.

In the 1980’s a western organization conducted DNA tests on the Kaifeng Jews. The results were surprising. It shows that the Kaifeng Jews were purer in bloodline than many of the Russian and German Jews in Europe. “We are the chosen people, not because we are better, but because God decided to teach others using our stories” says Esther. Indeed, haven’t we learned much through the rise and fall of the Jewish culture? Haven’t we learned much about ourselves through our treatment of the Jewish people?

A month passes by, and I am sitting in my basement in Canada reviewing the footage and photographs of those two fateful days. I come across our group photo. There, in her apartment, Esther is sandwiched between us. My wife, a Jew; myself, a Chinese; and Esther a Chinese Jew.  It dawns on me that I may ALSO be part of God’s plan. That I, a Chinaman, has some role to play in the stories of Chinese Jews. Like Esther’s Chinese father who built the model of the synagogue; like all the Chinese that loved and were beloved by the Jews and formed families with them; like the Chinese scholar who forbade the selling of Chinese Jewish monuments to foreigners; like the millions of Chinese who laughed, cried, lived and died alongside the Jews; it is I who is swept off my feet by the arduous and miraculous Jewish journey in China.

Nowadays, when I close my eyes, a defiant and resolute Esther stands in front of me. She is willing to throw away everything in her life to be God’s chosen messenger and storyteller. She believes that her people’s story does not deserve to die in obscurity and drown in the river of time. She knows there is something we could all learn from the extraordinary stories of her ancestors. 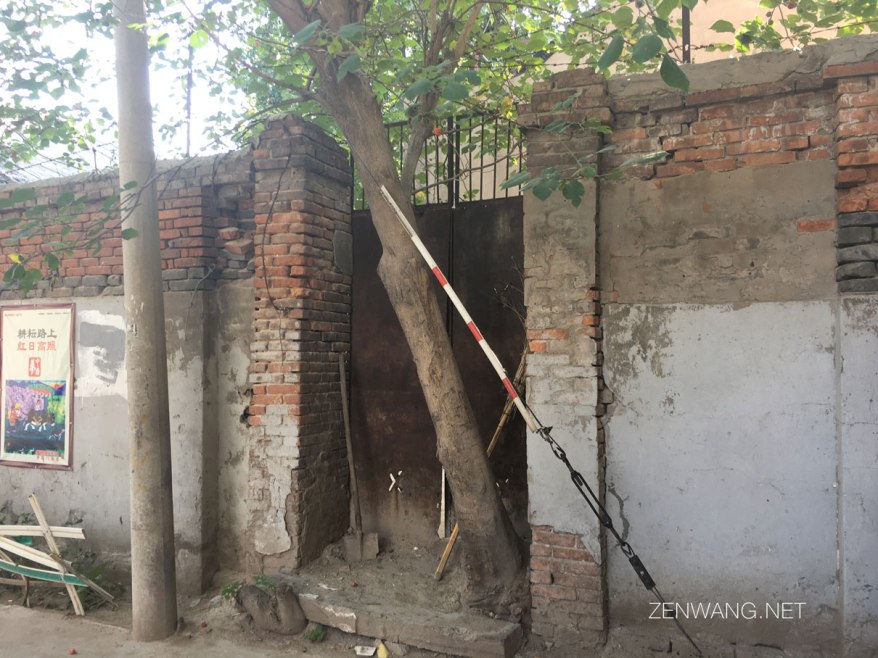 On the timeless banks of the unforgiving Yellow River stands a skinny lady who looks mostly Chinese but knows in her heart that she is a Jew and will remain one till the end. Who are we to question? Who are we to judge? All I hope for is that when the next flood ravages the land, a branch of the fig tree can be left alone. So that it will provide a piece of comforting shade for the next story digger who comes along. 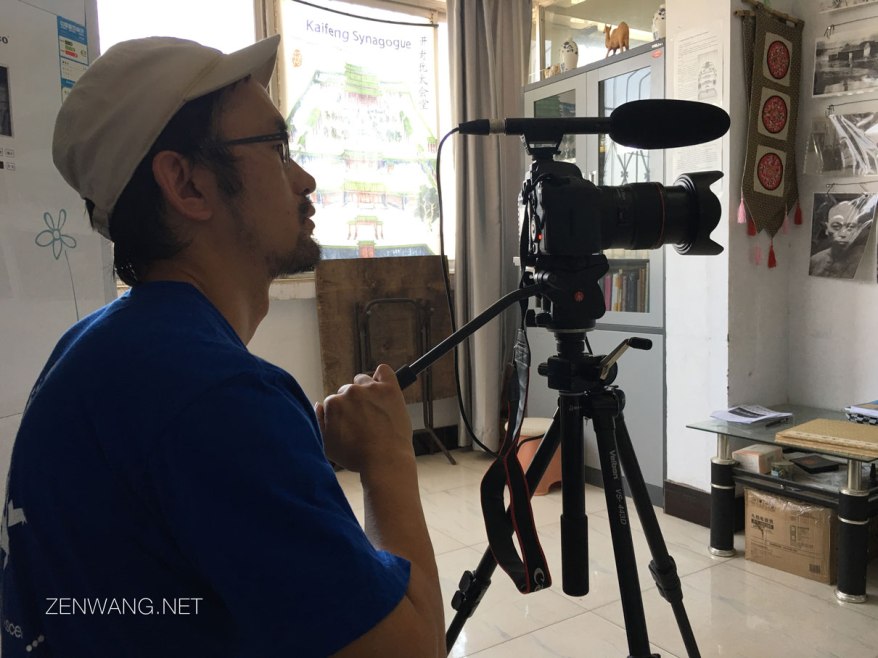 Zen is a filmmaker with a mission to “Share stories that matter with people who give a damn.” He has produced four   documentaries and is working on the fifth one. He also works on film and TV productions as Art Director.